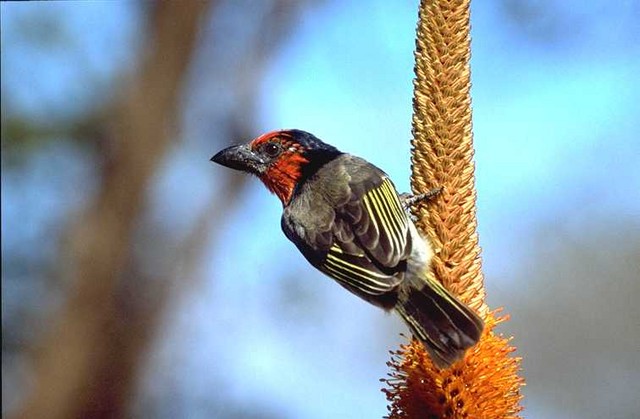 The elusive Buff-spotted Flufftail --- Our pristine recording site among the forested dunes of St. Lucia on the Indian Ocean --- A Black-collared Barbet
Excerpts from "Soundscape #1, St. Lucia, South Africa, 4:15 a.m."

It is December 21st, 2006, the longest day of the year on the overgrown sand-dunes of Saint Lucia, South Africa.  Here, in the triple-canopy broadleaf rainforest on the coast of the Indian Ocean, the sun rises today at 4:19 a.m.  In order to capture a surround-sound recording the coming “dawn chorus” of birdsong, our party must be up and in position by 3:45 a.m.  Fortunately, African Wood-Owls sound off noisily in our camp before we can oversleep our alarms.  Then, beginning at 4:15 a.m., the drama of sounds unfurls around us.

1) Darkness – We hear the mesmerizing tonking and squeaking sounds of bats, the gentle churring of crickets, and the territorial challenges of the wood-owls, delivered in rhythmic bursts of hollow whistles.
2) Owl Cadenza – The musicians join in the territorial squabble of the owls and spin threads of rhetoric before settling back into silence.

4) Goshawk Attack – The lyrical banter in the first light of day is soon interrupted by the sudden arrival of a predator.  A Pale Chanting Goshawk swoops into a nearby flock of Blue Waxbills as they feed on the ground. Narrowly escaping the surprise attack by flying to cover, the smaller birds begin to band together to scold and menace the hungry raptor.  Soon the goshawk is driven off—at least for now…
5) Nicator Solo – And now comes an extraordinary sound from the dense cover—the voice of the Yellow-spotted Nicator.  This bird creates a twisted bubbling sound that spirals up and down with the timbre of water dripping in a deep well.  We search and search, but the bird seems to be taunting us from the thick cluster of fig leaves and palm fronds above our heads.  He never reveals himself to us—but we know Nicators are famous for this.

6) Chorister Robin-Chat – And now the much-anticipated Chorister Robin Chat lives up to his name.  Even as thunder rumbles in the distance, the voice of this remarkable singer rings out like a bell--After three clear introductory notes, there is a rapidly descending cascade of diminished notes.  Before long, other Choristers answer in various keys, creating a textural crescendo.
7) Rain Crescendo -- The distant thunder approaches, keeping its promise, and the rain begins to fall.  As the intensity of the mounting storm peaks, we are able to continue recording for only a few more minutes, capturing some dramatic thunder claps from under thick vine-tangles—eventually we are too soaked to continue…